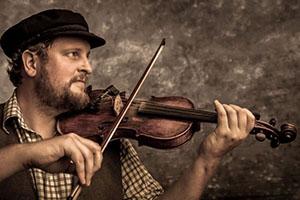 ng for the Kimball Library in a Virtual Concert, Jordan will be solo, and will entertain us with favorite fiddle tunes and songs with guitar accompaniment.

Bringing fresh energy to traditional Celtic music, fiddler/singer Jordan Tirrell-Wysocki was first recognized as part of New Hampshire’s musical culture at the age of 12, when he was the youngest member of the delegation representing the state at The Smithsonian Folklife Festival. He grew up on a combination of contra dances and Celtic music, releasing multiple recordings and performing regularly around New England for over twenty years. In 2013 the NH State Council On The Arts named Jordan a “Master Artist” and in 2016 he was named “Best Fiddler” by New Hampshire Magazine. He has collaborated with names such as Máiréad Nesbitt (Celtic Woman, Lord Of The Dance), Ciaran Nagle (Riverdance, Ishna) and Ernest Thompson (On Golden Pond), and is on the NH Humanities roster of presenters with his program on Irish emigration. He has written soundtracks for audiobooks and television (including the New England Emmy®-nominated theme music for NH Chronicle) and appeared as a guest on over 75 albums. His own recordings can be heard on radio stations around the British Isles as well as here in New England. He continues to perform regularly at concert halls, listening rooms, festivals and private events, mostly in the Northeast.  To learn more about the Jordan visit (here).

If you would like a gentle concert reminder, please register here.  Sponsored by the Friends of the Kimball Library.