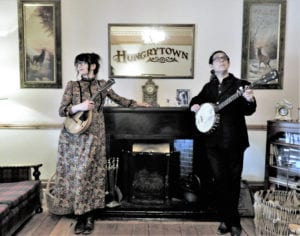 Join us for the last of our 2020 Summer Virtual Concert series as we welcome the talented Hungrytown.

After more than fifteen years of world-wide touring and three album releases, Rebecca Hall and Ken Anderson–otherwise known as the folk duo Hungrytown–have earned a reputation for the quality and authenticity of their songwriting: It’s great to hear an act eschew sentimentality in favor of honesty and to prove that you don’t have to go raiding the memory of others to find the stuff that really good songs are made of,’ writes Jedd Beaudoin of Popmatters.

Lyricist Rebecca Hall is credited with compositions ‘that sound as timeless as any traditional songs’ (Northern Sky, UK) while producer/multi-instrumentalist/husband Ken Anderson is lauded for his ‘remarkable affinity for instrumental embellishment’ (No Depression) and for crafting Hungrytown’s ‘gorgeous vocal harmonies’ (Folk and Roots, UK).

The couple spend more than half of each year on the road, especially roads in North America, Europe and New Zealand. Hungrytown’s music has received extensive radio airplay worldwide and has appeared on several television shows, including Comedy Central’s The Daily Show, IFC’s Portlandia and Netflix’s Lady Dynamite.  Their third and latest album, made the top 10 on the American Folk DJ charts and at least 14 ‘Best of the Year’ lists.

To receive a concert reminder please register here. *Sponsored by The Friends of the Kimball Library.ung