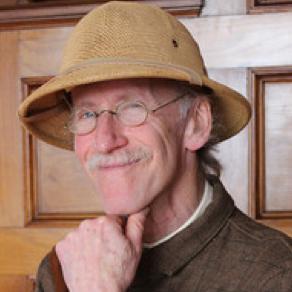 Rudyard Kipling was the most internationally-celebrated author of his day. The first four years of his marriage and fatherhood were spent in New England where he built his dream house – Naulakha in Dummerston, Vermont – now preserved as a Landmark Trust property. It was there that he penned The Jungle Book and other classics. These were productive and happy years for the young literary giant.

Jackson Gillman provides a sensitive portrayal and inside look at the writer’s experience in New England and some of the controversy surrounding this complex man.  Part lecture, part living history, part storytelling, Jackson’s presentation includes a selection of the classic Just So Stories.

About the presenter: Jackson Gillman’s storytelling career started with Rudyard Kipling’s stories in 1978. Since then he has been featured four times at the National Storytelling Festival and has thrice been Teller-in-Residnece at the International Storytelling Center. Since 2000, Jackson has portrayed ‘Rudyard-in-Residence’ at Kipling’s historic Vermont home for a week each year. In 2014, Gillman was invited to bring a dramatic performance of ‘The Magic of Rudyard Kipling: Just So’ to Off-Broadway as part of the United Solo Theatre Festival. Of the 130 shows from around the world, it received the Best Educational Award.

Sponsored by the Kimball Library and a grant through the New Hampshire Humanities.  Free and open to the public. Please register to attend this event by clicking here.