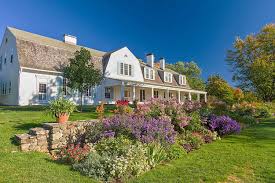 In the early 20th century, the New Hampshire Board of Agriculture launched a program to boost the rural economy and promote tourism through the sale of abandoned farms to summer residents. After introducing the country house movement, Cristina Ashjian focuses attention on some of the great country estates featured in the New Hampshire program between 1902 and 1913. Which private estates were recognized as exemplary, and who were their owners? Using historic images and texts, Ashjian discusses well-known estates now open to the public such as The Fells on Lake Sunapee, The Rocks in Bethlehem, Saint-Gaudens National Historic Site in Cornish, and she includes local examples when possible.

Cristina Ashjian is an art historian and an independent scholar based in Moultonborough, where she is presently the chair of the Moultonborough Heritage Commission. Her current research focuses on late 19th and early 20th century country estates. Ashjian holds an MA in the History of Art from the Courtauld Institute of Art, University of London and a PhD in Modern Art and Architecture from Northwestern University.

To help us plan accordingly registration is requested. Open to the public, this program is made possible by a grant from New Hampshire Humanities.