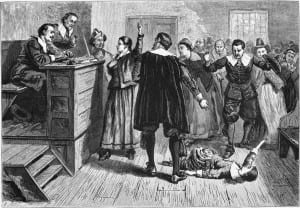 On first impression, the witchcraft trials of the Colonial era may seem to have been nothing but a free-for-all, fraught with hysterics. Margo Burns explores an array of prosecutions in seventeenth century New England, using facsimiles of primary source manuscripts, from first formal complaints to arrest warrants, indictments of formal charges to death warrants, and the reversals of attainder and rescinding of excommunications years after the fact; demonstrating how methodically and logically the Salem Court worked. This program focuses on the Salem witchcraft trials of 1692 and 1693, when nineteen people were hanged and one crushed to death, but also examines a variety of other cases against women in New Hampshire, Massachusetts, and Connecticut.

About the presenter:  Margo Burns

Margo Burns is the 10th-generation great-granddaughter of Rebecca Nurse, who was hanged in Salem in 1692 on the charge of witchcraft. She is the project manager and an associate editor of Records of the Salem Witch-Hunt, published in 2009 by Cambridge University Press. This work is the definitive collection of transcriptions of the legal records of the episode. Burns is also a life-long fan of cartoons, cutting her teeth on Popeye and Yogi Bear on Saturday mornings as a child, then formally studying animation for two years in the Rhode Island School of Design’s Continuing Education Program as an adult. She has been leading computer animation projects with middle and high school students since 2001 at UNH’s Tech Camp in Durham, where each crew makes a complete film in a week.  Burns currently works at St. Paul’s School, as the Director of The Language Center, where she is also the adviser to a student club, the International Lunchtime Animation Festival (iLAF), which taps her personal library of animation of over 750 titles.

Sponsored by the Friends of the Kimball Library and a grant through the New Hampshire Humanities.

Free and open to the public. Please register to attend this event.